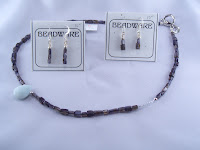 This necklace is made with Iolite and features an Agate teardrop. One version has silver plated balls midway (second photo) and the other has the addition of dove grey seed beads (first photo). Both have a silver plated toggle clasp. Necklace $45, Earrings $10 All have been SOLD.


A bit of trivia about the stones:
Iolite is known as the Vikings' compass due to it's ability to determine the direction of the sun on overcast days. When the 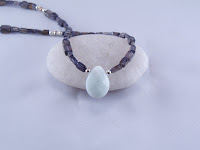 legendary Viking mariners sailed the wide ocean, they used thin pieces of iolite as the world's first polarizing filter. Looking through an iolite lens, they could determine the exact position of the sun, and navigate safely.


Agate is the birthstone for Taurus, April 20 - May 20. It is also the stone for the 12th wedding anniversary. Agate is a cooling stone, it reduces fever, quenches thirst, and is beneficial in the stomach area. It quiets the pulse and insures good health and a long and prosperous life. 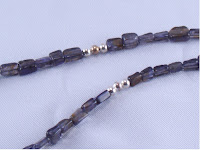 Agate guards against danger. Wearers become cautious. It helps one view themselves with more clarity and see the world through a broader viewpoint. Wearing Agate is believed to cure insomnia and to insure pleasant dreams. 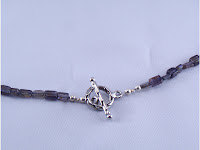