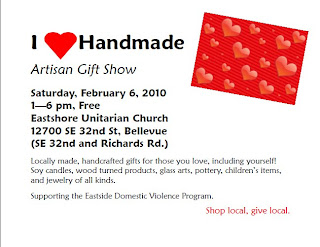 Email ThisBlogThis!Share to TwitterShare to FacebookShare to Pinterest
Labels: event

For the next few weeks I am focusing on making red things. Today it was this necklace with moonstones and cut garnet glass seed beads with a fancy gold plated toggle clasp. Moonstone is thought to bring love into ones life and is a highly prized gift for lovers as it arouses tender passion. Perfect for Valentines Day!! Moonstone is also the birthstone of May 21 - June 21 and the 13th anniversary stone. SOLD 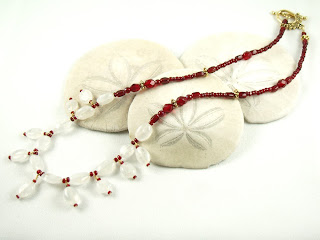 I've been busy making red things the last few days. I am calling this red and gold series Crimson Fire. Some fun and easy to wear bangles, sparkly triple strand necklaces and assorted earrings. I've got several more ideas in my head I hope to make this week. All have been SOLD. 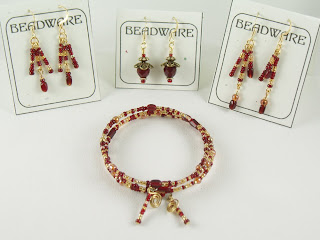 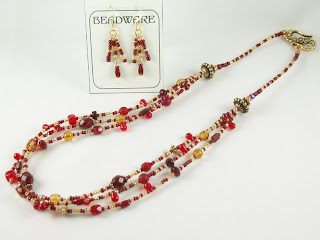 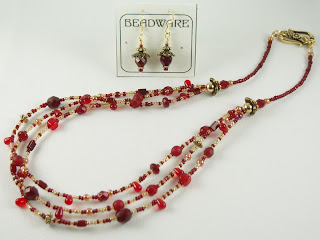 Love is in the Air - Handmade Valentines

I belong to a group of artists called EtsyRain which is made up of artists in the Seattle area who have online stores on the website Etsy. There are not many options for events to sell our items at this time of year, so several of us decided to do our own. The sale will be in Bellevue on Feb 6th 1-6pm!! There will be jewelry, textiles, pottery, paintings, and photography. I will post more info when I get it as well as send out a flier to my email list. This will be only my second venture over to the other side of the pond to sell my wares. If you have friends in that neck of the woods I hope you will tell them about the sale.
Posted by Ann at 10:07 AM No comments:

Email ThisBlogThis!Share to TwitterShare to FacebookShare to Pinterest
Labels: event 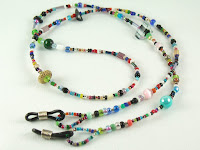 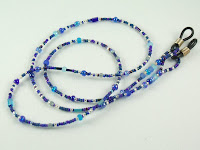 I have added two more eyeglass leashes to my online boutique. Bits 'n Pieces is a fun and whimsical multi-colored version while Ocean Blues is various shades of blue and silver.
Posted by Ann at 8:43 AM No comments:

I usually choose silver-plate over sterling silver for my metal findings (clasps, hooks, ear wires, headpins, etc) because of the cost. Making this choice allows me to keep my prices very affordable.

Many jewelry makers feel that plated metals will not hold up, that the plating will wear off quickly. I have not found this to be true. I have sliver-plated earrings that I have worn for many, many years. A few have become discolored with a patina, but most look just as they always have.

So what exactly is silver-plate? I did some research on the internet to find out for you.

Silver-plated findings are electroplated, which means a thin coating of 100 percent silver is chemically deposited on base metal. The silver layer is bonded to the base metal via electric current. The quality of silver-plate is determined by the thickness of the silver coating. Examples of base metals include iron, steel, copper, brass, nickel, and zinc. Most of the findings I use have copper or brass as the base.

I have read that plated pieces will oxidize - blacken - faster than solid silver as the base metals properties overpower the plating. Again, in my own jewelry I have not found this to be true. If you damage or scratch the plating deep enough you can expose the base metal. I have never had this happen with my own jewelry. Although silver-plate doesn't carry the same "air" as sterling silver, it lasts nearly as long and is an affordable alternative.

Caring for and cleaning silver-plated jewelry:

Sulfur is the main culprit in causing silver to tarnish or turn black. You can decrease tarnish build up in between wearings by minimizing exposure to the air and humidity. Store in plastic air tight zip lock bags and add some anti-tarnish paper. Or you can use anti-tarnish cloth in the form of jewelry bags or the lining of a jewelry box. Do not place pieces in a cardboard box or on paper as they have sulfur-producing compounds in them that increase the rate of oxidation. Personally my own jewelry hangs on a rack and bulletin board in my bedroom. It is in dim light and normally is a very non-humid place. This has worked for me for many years.

In addition to tarnish-prevention, another way to avoid wearing down silver-plate is to not over-polish. Any process that removes tarnish also removes minute amounts of silver on the surface, so the less you have to polish the longer life your item will have. To remove tarnish from silver-plate you can use the same techniques that you would with solid sterling silver items.

I do not recommend using dips, polishes or pastes on your jewelry. They can be very abrasive or harsh. If your piece has stones I would definitely not use these methods as they can damage many stones. Polishes and pastes are abrasive and will remove too much of the plating with each polishing.

I do recommend using polishing cloths. They work amazingly well, are very easy and not messy. When you do polish, do not keep polishing the item just because the polishing cloth continues to discolor and turn black. When the item appears shiny and lustrous, you're done!

I think the best cloth is the Sunshine Polishing Cloth. I have found a good source to buy some in bulk and will soon have them for sale. Stay tuned!
Posted by Ann at 2:34 PM No comments:

I made a number of these at the request of several folks who were looking for pretty ways to hang onto their glasses. This one features ruby red and wine red fire-polished crystals, cardinal red seed beads, clear glass teardrops and cubes, and red glass rounds. The eyeglass holders are clear plastic with silver plate. The total length (including eyeglass holders) is 29 inches. I also have these in blue, green, orange, pink and multi-color. 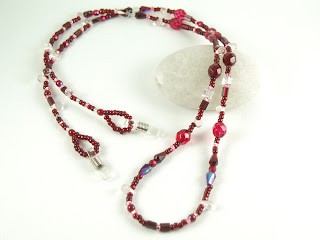 The name for this wine-colored gemstone comes from the Latin granatus for "seedlike," because the crystals resemble pomegranate seeds. Garnets also come in yellow, orange, green, pink, white and gray. These stones form under high temperatures and/or pressures, and can be used by geologists as a gauge of the temperatures and pressures other rocks in the vicinity have endured. They are also an indicator mineral for diamonds. The traditional way of finding diamond deposits is to sample materials at the surface, looking for minerals, such as garnets, that are often formed with diamonds, but in much greater quantities. Garnets are found in Kenya, Sri Lanka, Thailand, Brazil, India, Madagascar, Canada, the U.S.A., the Czech Republic and Spain.

According to legend, Noah suspended a finely cut, glowing garnet to illuminate the ark and steer it through the dark night. Garnets also are found in jewelry from the ancient Egyptians, Greeks and Romans, and have best been known as the warrior's stone. Soldiers carried garnet to ward off death and injury, and it also was used as a weapon against enemies by being shot out of a gun. The gemstone was set in shields, buckles and other items worn by Crusaders, and Italian widows commonly wore the gemstone in jewelry. Slices of garnet were also used as a mark of distinction in the windows of churches and temples.

Garnets symbolize fire, faith, courage, truth, grace, compassion, constancy and fidelity. It is a stone of healing and is used to treat disorders of the blood, heart, and lungs. They are believed to stimulate the bloodstream and pituitary glands, and to combat depression, lethargy and nightmares. Garnets are to be carried close to the body to maximize their balancing and peaceful energy, and are said to protect travelers from harm.

Metaphysical Properties- Red Garnet opens the root chakra while drawing earth energy into the body. Stimulates life-force, boosts sexuality and fertility. It works to move energy though the light body and circulatory system. Garnet also deals with issues of survival and abandonment. It is as a stone of purification, elimination and cleansing.

Numerology- Red Garnet vibrates to the number 2. The number 2 is about partnerships, cooperation and gentleness.

The color Red - symbolizes energy, strength, physical existence, and vitality. It is associated with the material side of life (abundance) and survival issues. It is used to increase circulation and to energize the nervous system. Red increases your connection with the Earth, it gives strength and will to live in the physical world.
Posted by Ann at 2:33 PM No comments: