Aren't these gorgeous? These were one of my first purchases at the bead shows in Tucson last month.I am thinking pendants or set into a bracelet or....? 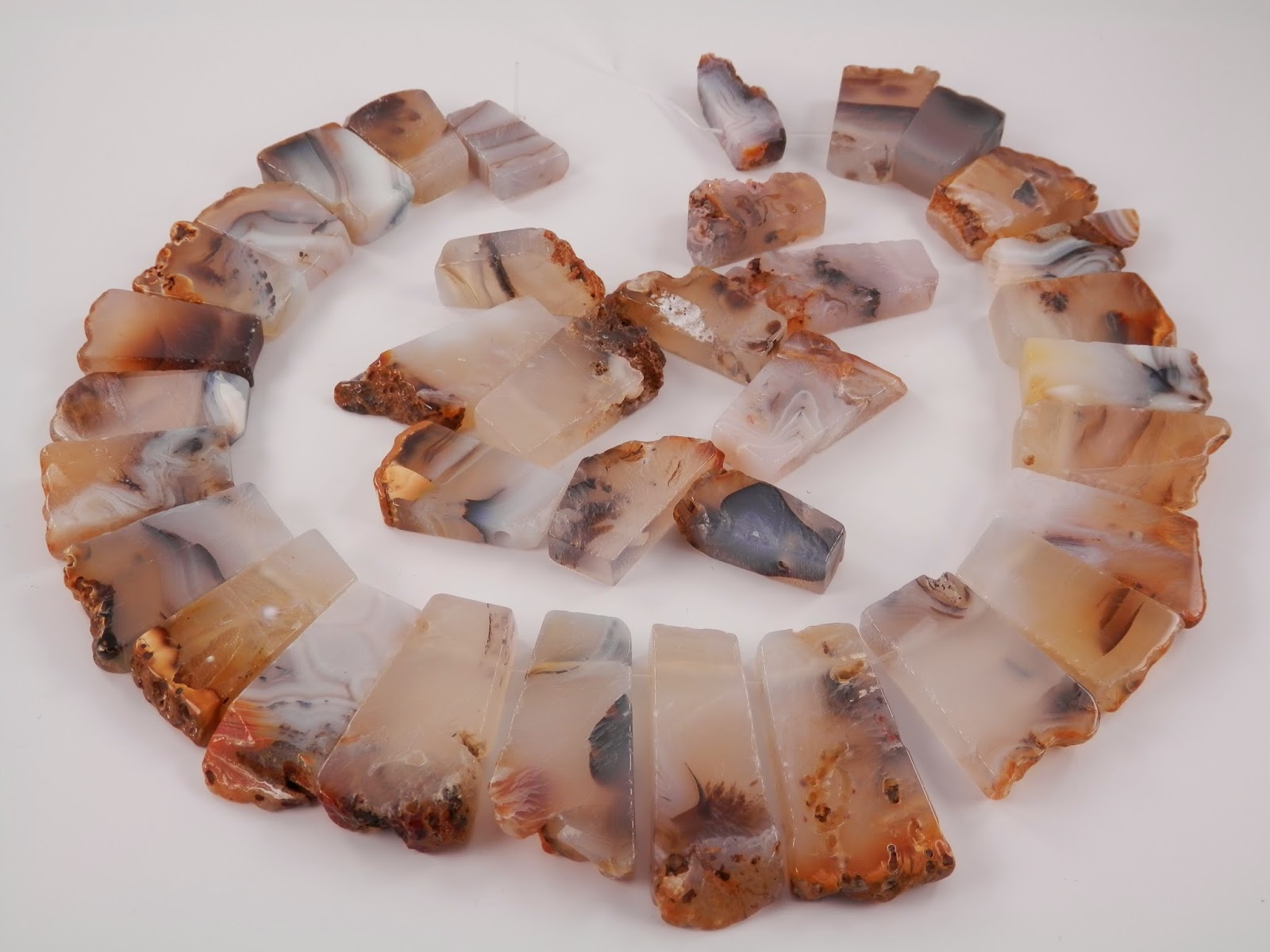 Montana agate is usually a creamy light yellow to almost clear color with embedded moss structures in varying shades of brownish red to black. This agate is also referred to as "moss agate" (an agate that has colored inclusions that may resemble moss) or "scenic agate". Most are found in gravel deposits from the Pleistocene age (10,000 - 1,6000,000) in  the area of the Yellowstone River and its tributaries. Along with sapphire, it is a state gemstone for Montana.

One of the most attractive features of Montana agate are the colored inclusions, made up of minerals such as iron and manganese. These inclusions form when mineral rich water moves into the rock through cracks or fractures and the minerals in the water are deposited within the stone.

Agate is the Mystical birthstone for the month of September and the birth stone for the Zodiac sign Gemini. Agate is suggested as a stone to give on the 12th and 14th wedding anniversaries. It is a stone of protection, strength and harmony. It is also known as a good luck stone.

Agate is a very protective stone. It is especially protective for children, and makes an excellent stone for children's amulets, medicine bags, jewelry, or just to carry around in a pocket. Agates are said to be especially useful for protecting children from falling.


Agate is said to strengthen the body and the body's connection to the earth. Physically, agate is said to be particularly helpful with tooth and gum issues, stomach problems, physical endurance, and insomnia.

Emotionally, agate gives courage, emotional strength, self-confidence, and dispels fears. It can also lessen feelings of envy by grounding the emotions. In the same way, it assists with acceptance of all things. It can be very beneficial for self-examination as well as examination of the circumstances one finds oneself in. These qualities make agate superior for easing anxiety and stress.

Agate enhances creativity and strengthens the intellect, making it a beneficial stone for both students and artists.  As a stone of harmony, agate balances yin/yang energy. Agate can cleanse and stabilize the aura by removing and/or transforming negative energy.

Because of the harmonizing qualities of agate, and its emotional energies of removing and releasing resentments and bitterness, it is also considered by many to be an excellent stone for helping to heal and improve relationships. Agate is thought to be a stone of marital and romantic fidelity.


Note: This information is provided for curiosity and is in no way meant to be medical advice.